It’s the most beautiful time of the year – Christmas is just around the corner. It’s also about holiday shopping. Customers plan to spend an average total of $1,048 on gifts during the holiday season for themselves and their families. So what?

With the brands, this is a profitable time. Don’t miss it. With the growing popularity of online shopping, more brands run their holiday marketing campaigns on social media especially Instagram. Here, we collected some best Holiday campaigns on Instagram to inspire you!

In 2017, The coffee chain created its holiday cup Starbucks as usual but they also encouraged people to “make the holiday cup their own” and tag the cups with the hashtag #givegood when posting them on social media.

The takeaway: Try to create a holiday theme for your merchandise that will wake people’s curiosity up. Along with that, connecting with your audience is important. They also desire to show their own ideas when they make a purchase. Starbucks understands that so they had such a successful campaign.

A charity program is never a bad idea for brands.  The #WishesDelivered campaign from UPS ingeniously combined the spirit of the holiday season and charity goal. The campaign is run to promote food deeds during the holidays and showcase stories where they have fulfilled a wish or delivered a surprise. (The stories are incredibly sweet, trust me.)

The same with #goodgive, UPS encouraged folks to share stories with hashtag #WishesDelivered. But specially, each time the hashtag appeared, UPS makes a donation to one of three charity partners.

The takeaway: The more we share, the more we get. The charities always touch people’s hearts. With this kind of campaign, you could not only help other people, but people also help you advertise your brands each time they post on social media channels with the hashtag!

Let’s try to host a contest or give away as Lush Cosmetics did. In 2017, Lush Cosmetics launched the new bath bombs for holiday so they determined to create a Christmas contest to promote them. Their new products make for a pretty and luxurious soak so they asked their fans to share the bath art. 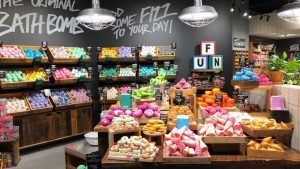 The folks joining the contest need to show off their bath art photos with Lush Cosmetics bath bombs including a caption about their holiday wishes and hashtag #swishuponastar.

The takeaway: By creating a contest that sharing the customer experience with the products, Lush Cosmetics is developing brand awareness and promoting its products at the same time. If the budget is not allowed you to play big, it’s easy to set the free products for your clients. Don’t worry about it. You will receive more than that!

Coca-Cola A sleepover in the famous Christmas truck

Do you remember the Coca Cola truck on your TV screen that will remind you it’s Christmas?

In 2017, the brand determined to work with Laterooms to create a fun competition. People had to tell why they are “ultimate Christmas fan”  to get a chance of winning a sleepover in the famous Christmas truck. Gifts from Sante will be sent to the lucky winners after that. They also got to watch holiday films and enjoyed food to complete their holiday season.

The takeaway: Everyone is attracted by something humorous. Just try to come up with a fun campaign will help you go viral easier. Also, you could cooperate with other influencers to increase the chance of success for your campaign.

We hope these best social media holiday campaigns will inspire you to make a great plan for your business.