Keep reading to explore more rap styles that define the revolution of rhythm and beat. 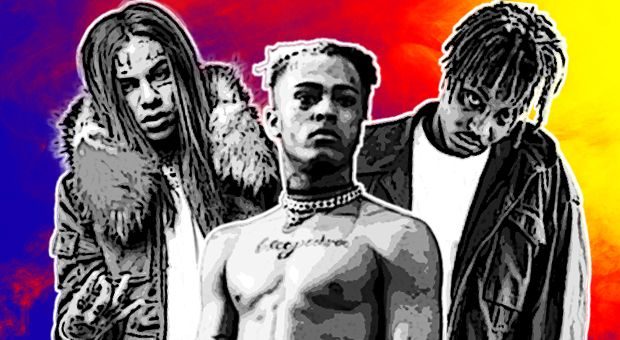 We can say that even rap music can have an emo phase.

Emo rap took inspiration from the tortured lyrics of Kurt Cobain, wistful melodies of midwest emo and screamo, and the auto-laden production styles used by neo-R&B artists like T-Pain.

Naturally, emo rap is most defined by its lyrical content and visual style—with artists like Lil Uzi Vert singing about their personal pains while maintaining a grungy dress code.

Grime is a hip-hop subgenre that comes from the UK.

You’ll hear a lot of bubbly synths and freaky pads used throughout many grime tracks.

Beyond the production, Grime is most notable for its lyrical style that leans heavily into specific dialects of English from parts of London.

Both the rhythmic delivery and lyrical content seem different, with plenty of British street slang used throughout the track.

Grime rappers of this rap style to check out: Skepta, JME

UK Drill builds on the trap-influenced stylings of Drill music from Chicago and combines them with the sound UK Grime rappers pioneered.

It’s a very new genre that only really grew to prominence in 2019. Rapper, Stormzy, and music producer AXL Beats are the two biggest artists of this genre.

The perfect way to describe everything about UK Drill is that it marries the distinct sound of UK Grime’s rhythmic lyrical cadence with drill’s intense drum production.

New York may get credit for inventing hip-hop. However, it wasn’t the only place where hip-hop was going on in the early 90s.

Down in New Orleans, another movement was starting—Bounce was the south’s response to what was happening up north.

Compared to the hard-hitting and gritty sound of New York MCs, Bounce was more interesting.

Its dancy nature and heavy use of call and response sections made it easy for people to sing along with.

Bounce also pioneered the fusion of soul and R&B with hip-hop music and featured many great women MCs who could both sing and rap—the late Magnolia Shorty is an excellent example.

This is a truly southern genre, that gave birth to southern hip hop and inspired crunk artists like Lil John and horrorcore artists like Three 6 Mafia.

Unlike Bounce, Horrorcore is a dark and transgressive genre—like its name suggests, it’s supposed to send chills down your spine with occult imagery and graphic lyrics.

I think out of all the more old-school genres of hip-hop, my favorite artists come from the horrorcore genre because of the clear links between its production style and modern trap.

It’s just so cool to hear the evolution of hip-hop.

My favorite horrorcore group is Three 6 Mafia. Listen to their 1995 album Mystic Styles and you’ll hear the reason why it’s credited as an early inspiration for trap music.

Horrorcore has a gritty and lo-fi edge without sounding like it’s from New York. It’s completely true to its southern roots in Memphis and Houston.

Latin trap is the union of reggaeton and trap music.

People often sing Latin trap in Spanish and it usually will feature both singing and rapped verses and choruses.

Conscious hip-hop grew in tandem with boom-bap in the mid-90s—but with a political focus spawned from the 1992 LA riots.

Groups like A Tribe Called Quest and NWA witnessed what was happening with police brutality towards black communities and wrote music to voice their anger.

Conscious hip-hop kicked off a tradition of telling the truth to power in hip-hop, paving the way for artists like Common and Kendrick Lamar.

The Roots - The Next Movement

Soundcloud is the great platform many rappers today use to build their following and develop their voice.

It’s a free streaming platform where anyone can publish their tracks, get feedback and engage followers.

That’s the reason why it’s no surprise that Soundcloud has given opportunities to many artists and even an entire style of rap.

Because the platform is free from the demands of other mainstream platforms, Soundcloud rappers have lots of room to experiment.

Many Soundcloud rappers spit verses over weird and unique music productions, use shocking and strange lyrics and keep a colorful and artistic aesthetic.

If there’s one thing that unites successful Soundcloud rappers it’s their volume of output—these artists put a ton of content out on the platform.

Lil B - I Own Swag *MUSIC VIDEO* WOW THIS IS MOST EPIC TO DATE! SPEECHLESS

During the rise of New York’s hip-hop scene in the 90s another scene on the west coast was brewing in Oakland—this is where the hyphy genre was born.

Hyphy is known for its influence on producers like Dr. Dre and for laying down the groundwork for west coast genres like G-Funk and overall laid back feel 90s west coast rap is famous for.

Its main progenitors are Too $hort and E-40, who both created fun music that embodies the sunny and funky style hyphy is famous for.

Hyphy rappers to listen to Too $hort, Keak Da Sneak

The genre blew up in popularity from YouTube streaming playlists that seem to house an endless supply of the boom-bap inspired beats.

G-funk might be one of the most famous genres of hip-hop because it took the world by storm in the late 90s and early 2000s.

Its most important producer is by far Dr. Dre, who fused funk with unique electronic drum production to create an entirely new hip-hop sound.

Everyone from the California scene in the early 90s worked with Dre if they had the opportunity.

Ice Cube - It Was A Good Day

Footwork is maybe my favorite modern sub-genre of hip-hop because it’s just so unique and nothing really sounds like it.

I’ll credit the invention of footwork to the Teklife record label in Chicago and footwork’s most famous artist the late DJ Rashad.

Footwork is cool because it’s so fast BPM-wise and it really pushes the limits of classic trap production.

Blistering fast hi-hats, e switching up the beat between triplets and duples and exclusively using a hard-hitting triplet kick feel are what define the genre to me.

The drums and rhythm are huge in creating a footwork track, but also the genre relies heavily on chopped jazz and soul samples.